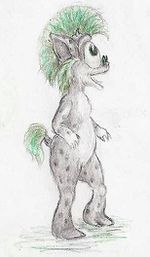 Norns are a species of intelligent animals from the Creatures series of virtual life games. Norns are cute, cuddly, and fairly intelligent.

The Norns live on a planet called Albia for the first two games of the series, and on space ships for the latter two, as well as wandering around more lively places like playgrounds and castles in the two games aimed at young children.

In technical terms, Norns are made up of a simulated biochemistry and brain system, along with a series of sprites that are animated along with sound to give the appearance of movement and life.