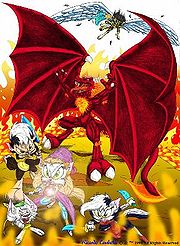 No One´s Land is a medieval series based on a Role Playing Games (RPG) style created by Ricardo Canheta. It tells the story of two races fighting each other: the Draconians and the Winged Jaguars.

The Winged Jaguars think they´re angels sent by God to get Earth rid of the devil creatures known as the Draconians. The Draconians are a new kind of dragon that can communicate with other living beings; they walk on two feet instead of four. They´re bound to the Nature itself directly and if their species disappear for some reason, then so do all the rest of the environment. But the Winged Jaguars (that aren´t angels at all) don´t care about that and carry on with their task to eliminate all of the devils. Little do the Jaguars know that they´re created by a powerful witch that want to change life our way of life as we know it and transform Earth in her particular world where she will rule.

Some of the Balls of Furr characters play some parts in this series as important pieces of the game: Cado as Bulls Eye, Ani as Enchantment, Pat as Velocity and Ric as Iron Claws. No One´s Land still has some guests from other artists such as Lara from Vasco Morais from Portugal and Ivan from Samoied from Brazil.