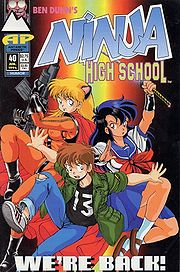 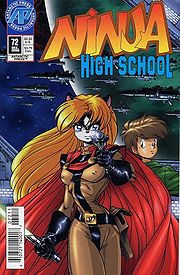 Ninja High School (also known as NHS) is a comic series created, written, and illustrated by Ben Dunn, and published by Antarctic Press. On occasion other artists and writers have contributed to the series.

NHS takes place in a suburban town known as Quagmire, located "Somewhere in the Midwest". The series originally centers on the misadventures of one Jeremy Feeple, a 16 year old boy attending Quagmire High School, an alien princess named Asrial from a planet called Salusia, and a young female Ninja named Ichi-Kun Ichihonei, from Japan. Originally intended as a mini-series, the comic hit such a boom of popularity that it became a full series, currently totalling over 139 issues (as well as two mini-series, Ninja High School V2 and Quagmire USA). There has also been two-issue furry parodies which went by the name Furry Ninja High School and Furry Ninja High School Strikes Back. Fan-contributed editions of the series include the "Ninja High School Yearbook" and "Ninja High School Swimsuit Edition". The series plot started rather simply: Princess Asrial was sent to Earth to find Jeremy Feeple and marry him, an act that was described as required to ensure that their enemies do not lay claim to the planet. Since Earth was a non-aligned world, anyone could claim it, and the Salusians were desperate to keep it from being used against them. Ichi went to America to marry Jeremy as well, although her reason's for the trip were different, in order to become leader of her clan, her grandfather informed her that she had to marry the boy, the reason behind this is that Jeremy's mother was raised by this grandfather, and they wanted to be blood related. Unfortunately, shortly after landing, Asrial, Ichi, and Jeremy Feeple get caught up in a whirlwind of comic mischief, fighting, and plots by local villains to take over the planet. The comic often features parody versions of other comics or television shows, like Kamen Rider, Power Rangers, Harry Potter, Superman, The Powerpuff Girls, Terminator, Ninja Gaiden, Transformers and the Gundam series.

The comic itself is often violent, depicting fights and on several occasions partial nudity of some characters. The rating was set early in the series when Jeremy walked in on Asrial after a shower and got a faceful of exposed breasts (for which he was clobbered). Such instances do not occur with the same result consecutively, but it does happen in one way or another.