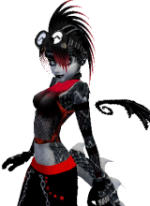 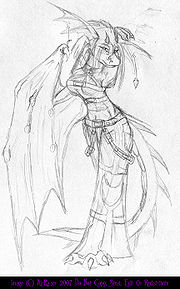 NightDragon is a furry artist who lives in South Carolina. Her fursona is an anthropomorphic heterosexual dark dragoness named Nyx.

NightDragon is also a global moderator on the IMVU Furry Forums.

Nyx was born of an earth-type mother and a fire-type father. Her color and powers were inexplicable, due to the fact that there had never been any dark dragons in her family or clan.

While she lived in the cave with the other dragonesses, she was always eager to leave to see what was on the outside. Since dragonesses are rare, they were kept in a system of caves, waiting until the Dragon King thought they were mature enough to leave on their own, at which time they would be given names.

Nyx ran away without the Dragon King's knowledge, and fended for herself before she was captured by human scientists, who tagged her left ear with a crescent earring and placed her in a facility with other dragons like herself. All of the creatures in the facility were experimented on, the scientists' objective being to make a legendary creature a perfect weapon. None of the dragons survived the 'enhancements' of cybernetics except her.

As she left before the Dragon King could name her, Nyx has no true name. She was named Nyx or Draco Volans by the humans that tested and experimented on her. Though her age remains unknown, it is known that she is young, around the age of a young adult dragon.

Nyx's scales are black with small hints and tinges of dark purple mixed within when the lights hits them in the right manner. She has a soft, light gray underbelly from under her neck all the way to the end of her tail.

Nyx's tattered wings are black with light gray webbing, and she has long light gray spines that run from the middle of her back to the end of her tail. She has horns that are relatively short and protrude from her forehead like a demon rather than the traditional swept-back look of a dragon.

Nyx's eyes vary from silver to a dull, dark gray depending on her mood, and her "hair", which is more or less like iguana spikes, is styled in a black cyberhawk with red tips. Her left arm is cybernetic and almost indestructible.

Nyx typically sticks to darker clothing. She prefers black pants with red stitching along with the occasional chain suspenders or straps, and a black buckled top that criss-crosses her chest. She always has a crescent moon earring that dangles from her left ear, and her black goggles that rest behind her horns and have white lenses with a '^' on each lens.

Nyx also wears black fingerless gloves with studs across the knuckles, and a black tattered cloak. She prefers not to wear shoes, but occasionally wears black Converse All Stars with red shoe laces.

Nyx can breathe fire and fly. Unlike a normal dragon's fire, hers is black and causes whatever it touches to decay as it burns. She also has varying amounts of black magic that she only resorts to in desperate situations due to the fact that she cannot fully control the dark forces within her. This is why she is considered a dark dragon.

Nyx prefers not to use weapons. She usually sticks to her own natural weapons; teeth and claws. She also uses her cybernetic arm as a weapon.