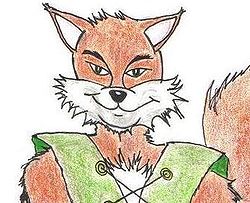 Nicodemus Witherspoon, also known as Electro the Hedgehog or Jango52577 (born November 22, 1985), is a furry artist and Mucker from Cleveland, Ohio, USA. As of 2006, he is a student at LCCC, studying to become an EMT/Paramedic. He is an active player on FurryMUCK and regularly contributes on deviantART. His chosen fursona is a red fox.

Nicodemus's fursona is approximately 20 years of age, about 6ft tall, and 180 lbs. He has gray-green eyes, red fur on his body with white fur on his muzzle, his belly, and the tip of his tail, which is always carefully groomed as he takes much pride in its appearance. He also always seems to have a mischievous smirk upon his face making him unpredictable at times. Strange and intricate tattoos adorn his arms and calves and appear to be ritualistically self-done. This particular fox was a fox's soul trapped in a hedgehog's body anxious to be freed. He was visited by a faceless shaman known as Karthak the Wise from the Valley of Mists and was offered an opportunity to be "enlightened".

This would come at a heavy price though. As payment for the Karthak's services, Nicodemus would have to serve Karthak as a guardian of peace and justice in all the land for all eternity. He would come to be known as Nicodemus the Enlightened. If the fox were to show any sign of betrayal or weakness and compromise his duties, his new body would be destroyed immediately and his soul would become the possession of Karthak the Wise.

As soon as the shaman released Nicodemus' soul, his hedgehog body putrified and disintegrated. Then through advanced alchemy, Karthak conjured his soul into his new host fox body. Nicodemus was now in his true form. After his rebirth, Nicodemus had to undergo many painstaking rituals and trials to ensure his new body could handle a new soul as well as life in a new world. But this world wasn't unknown to Nicodemus. It was from his past. Also to aid and defend Nicodemus from the dark arts, he was given an enchanted silver ring with a mysterious midnight blue jewel inside. He was also given an ancient hand and a half sword known as the Breath of Vulpine to aid in offense. About a week later, Karthak released Nicodemus from his graces and said he would be in contact with him in the near future.

Nicodemus is clothed in a sleeveless dark green tunic with black leather leggings and hunting boots. He also wears a sheath across his back which carries the Breath of Vulpine when not in use. He also owns a stallion black cloak that he only wears when it becomes too cold for his tastes.

Nicodemus has been a furry fan as long as he can remember, liking films such as Robin Hood and The Secret of NIMH from a very young age. A large part of his fandom stems from the popular video game and former Saturday morning cartoon Sonic the Hedgehog. He made his first appearance in the community in 2005 as Electro the Hedgehog, inspired by the famous blue hedgehog. He began submitting art on deviantART and participating on FurryMUCK shortly there after.

In 2006, Nicodemus decided he wanted to branch out a bit and begin portraying a new character entirely. Even though he is still a huge fan of Sonic the Hedgehog, he wanted to try a more original character. He was also growing weary of constantly being mistaken for "Electro Sun Dog". For a while, before his transformation, he began going by Electro's middle name, "Nicodemus", inspired by the character of the same name from The Secret of NIMH. Shortly after this, he made his transformation and ended up choosing a fox because it was one of his favorite animals. He admires them for their natural beauty and their fabled cunning. He realized in choosing a fox as his new fursona that he would have to deal with a bit of ridicule surrounding common stereotypes associated with foxes (goofy, horny, toony, dumb, etc.).

On August 7, 2007, Nicodemus further affirmed his fandom and love for red foxes and the furry culture by getting a tattoo of one. The actual tattoo was based on a sketch in his deviantART gallery entitled "Sly Devil". He claims that it hurt like hell, but it was all the more worth it because it was something he designed and something that meant a lot to him.