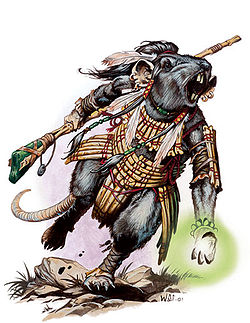 A Nezumi sorceress of Rokugan

Nezumi fictional races are most often anthropomorphic rats. They share some qualities of Oriental cultures and have a knack for thievery and ninjutsu. This image is probably thanks to Nezumi Kozō, Japanese noble thief hero similar to Robin Hood.

Rokugan is the world of Legend of the Five Rings trading card game and also a campaign setting for Dungeons & Dragons and d20 role-playing games. It is based on Oriental mythology. The Nezumi, also called Ratlings, is one of the core races for the setting, although most of the game is dedicated to human culture.

Nezumi are about the same size as humans; they average five and a half feet tall and 155 pounds.[1] Nezumi possess great vitality, cunning and keen senses. They have special glands that can be used to leave scent messages for other Nezumi. Other bestial feature are combat-ready claws and teeth. Depending on his tribe, a Nezumi have additional advantages and disadvantages, such as small stature or cold resistance.

The Nezumi had a vast empire, conquering the kingdom of the Ogres and occupying most of the area currently taken by the Shadowlands. Most of the Nezumi civilization was destroyed when Fu Leng fell from Tengoku. In 314 a twelve year old named Hiruma Kazuma developed a strange rapport with the Ratlings and forged bonds of trust with them. This resulted in Nezumi alliance to human Crab Clan. The Nezumi currently hold a very strong position. The tribes stand united as the One Tribe under the leadership of Kan'ok'ticheck.

Magic: The Gathering collectible card game feature Nezumi in the Kamigawa block based heavily on Japanese folklore. Sets of this block represent events of unexpected war between Material World beings, such as Humans, Kitsune and Nezumi, and kami of Spiritual World.

Nezumi are solely black-color cards with "rat" creature type (spells and effects treat them like any other rats). Black color cards represent necromancy and dread, and so Nezumi abilities involve fear and sacrificing other creatures. They have more shamans than they have warriors. Their kami patron is a grotesque rat-like creature with stance and size of a tyrannosaurus.

"Nezumi" is the name for Oriental Ratkin, the wererats. Their mission set by Gaia is controlling human population. They failed at that, but still struggle to fix the mistake. Unlike western Ratkin, Nezumi are more impatient with their ways. They use any weapon in their reach, such as diseases and explosives, and breed fast. Thanks to night vision and perfect sense of direction, Nezumi have great talent for navigating underground. Their other abilities are governed by auspice chosen after the first year of life as a Nezumi. The four auspices are different from that of Ratkin.

Nezumi are despised by Nagah, the wereserpents who ruled and took care of humans in the Age of Kings.

Mizune (ミズネ) is the name shared by a family of five mouse-like witch sisters ("Mizune" is actually Nezumi written backwards in kana). They are close friends with Eruka the frog witch. Mizune can transform into mice and possess magical whiskers that can be used as weapons. Their normal forms are small and child-like, and they communicate through mouse-like squeaks. They can combine into larger, more humanoid forms which increase in maturity for every sister involved in the transformation.

Captain Nezumi (ネズミ大佐 Nezumi Taisa) is a Marine Officer from anime One Piece. His manners are rodent-like, and his appearance is that of rat gijinka (he wears ears hood and has whiskers). He steals, tricks and accepts bribes whenever it suits him.