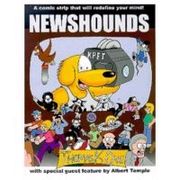 The cover of the first Newshounds compilation by Thomas K. Dye.

The book Newshounds is the first compilation of comic strips of the webcomic of the same name by Thomas K. Dye. The book covers the very first comics, starting with its first edition from 1 November 1997 to 1 January 1999, which introduced most of the main characters, as well as Ernest and Julia Dilbrook, General Swallowemup, KRVL, Yvonne, Manny the Mink, Dorian and Pomme de Terre. It was published by Plan Nine Publishing.

The book also has a two special features. It includes a special series written by Albert Temple, the creator of Gene Catlow, as well as a guide of KPET's fall programming.

Kevin is asked by Lorna to make a report about job hunting, by following Dorian, a former accountant, on his job hunt. However, the hunt does not go to well. Apart from making a musical résumé,[1], he cannot find the right job. Eventually, Kevin finds him a job, but it is not to Dorian's total liking.

Alistair gets held at "Gunpoint" by a supposed armed raccoon, but Alistair continues to point out that he will not fall for a simple finger pointed at him, or for a water pistol. When the racoon sees that he tried to hold up someone famous, he asks for his autograph.[2] Later, Alistair proposes that he should come on the news, but he has difficulty with Lorna.

The KPET crew try to get pictures of a new controversial fighter plane, by sending in Ferris with a tiny camcorder and in a disguise.[3] Ferris manages to the film the plane crashing, and gets the material put on air, but the air force claim the material was a hoax.[4]

When Yvonne fails to get flowers on Secretary's Day, she decides to sue Bill Clinton on sexual harassment charges, with the help of Wolfram. Eventually, Yvonne manages to get a settlement.[5]

The first long-term storyline. When Renata fell off a building pursuing George Michael for an interview, she was temporarily replaced by an attractive female dog, Pomme de Terre, who had a complete lack of experience, intelligence or sense of professionalism. However, when she sat on Wolfram's lap, KPET's ratings skyrocketed.[6] Lorna then considered the thought of her as a permanent replacement and make Renata do the weather, but she suddenly left to be a "trophy girlfriend".[7]

Wolfram is stuck in the middle of nowhere, so he hitchhikes a ride from an oil tanker. However, he later discovers that it is in fact full of napalm, and is being sent to a terrorist group in Azerbaijan. After a while, they stop at motel, where Wolfram is tied down to a chair without his trousers on. He thinks that this is the worst he can get, but faces even greater embarrassment when the police storm in.[8]

Lorna manages to get Renata a press pass to a formal state dinner, hosted by the President of Trilvania. During the dinner however, things become complicated when the President changes his title several times, and Renata starts to eat too much food.[9] Renata eats so much in fact, she throws up over the President. However, Wolfram cheers her up when he tells her that the President was in fact a con-man.[10]

Ernest and Julia come to visit Lorna. However, there are unaware that Lorna runs a news company full of animals, which is something of a problem due to Julia's pet allergies. When Lorna asks the reason for their visit, it turns out that Ernest, "Is currently on the run from the mob after skipping out on a $2 million loan."[11] After they leave on Halloween morning, several members of the mob arrive at KPET's doorstep demanding the money, but Renata manages to discover that they were rather old "Trick or Treaters," who are also, "Early risers."[12]

Due to there being no NBA Basketball, Sam enters KPET in the "Media basketball league". However, when tries to make a team, only Ferris and Kevin join in. To make things worse, none of them are any good at basketball, so when they do manage to do something right, they tend to go over the top in their celebrations.[13] When KPET face KRVL in their first game, Kevin and Ferris make Sam concede the game because KRVL where, "Gnawing on the hoops."[14]

Although not a major storyline, this started Alistair's annual tradition of visiting the beach every New Year's Day, and reflecting on the past and future.[15]

This guest feature was drawn by Albert Temple, where his character Gene Catlow (from the webcomic of the same name) is being interview for KPET news.

This was a mock guide to the other shows would be appearing on KPET during fall/autumn. They include Galaxy Seven, a sci-fi program about the creation of a star, I Love Lucy - The Next Generation "Featuring Rosie O'Donnell as Fred and Hulk Hogan as Ethel."[16]