From WikiFur, the furry encyclopedia.
Jump to: navigation, search
from WikiFur News
October 13, 2008 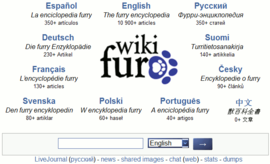 WikiFur launched a multilingual portal this weekend to celebrate recent achievements, convey the international nature of furry fandom, and promote participation in other languages.

The site's Russian and Spanish projects have each written over 60 articles since their creation in late September. WikiFur also reached a total of 10,000 articles in English last week.

Hosting for these projects - and for the new portal - is provided by French WikiFur administrator Timduru on the high-bandwidth server that streams the Funday PawPet Show.

All projects are accessible through their subdomains; for example, the English WikiFur is at en.wikifur.com. Use of these subdomains in links is encouraged.[1]

In the last month, the English WikiFur received visits from 171 separate countries.[2] Sixty of these sent 100 or more visits, while twenty sent more than 1000. A third of the site's traffic came from outside North America, mostly from Northwest Europe, Australia and New Zealand.[3]