From WikiFur, the furry encyclopedia.
Jump to: navigation, search
from WikiFur News
October 4, 2009 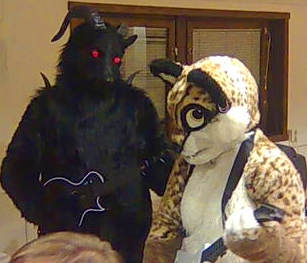 Last month saw a long-anticipated event - FurryCon, the first[1] furry convention in Sweden since Eurofurence 2 - drawing 110 people to the city of Karlstad on the north shore of Lake Vänern.[2]

The event ran from late Friday (18 September) to Sunday afternoon. It was organized by Spots and Stripes, and run by a team of 30 volunteers led by kirrow. Alcohol was banned, as was the display (but not private sale) of adult material.[3]

The two fursuiters were very popular, especially at the fursuit bowling outing. Also popular was the ear and tail workshop, roleplaying games, and party games such as Mafia. A large collection of video games were available; those wishing to loan them were required to leave an item of value behind.

The event was a financial success, running a surplus of 4000 SEK (~US$570). 10% was donated to the event's charity, Djurskyddet Karlstad (Karlstad Animal Welfare); their total was 1181 SEK after a charity raffle and dealer contributions.[2] Some found the furry theme lacking, but event organizers - most veterans of anime cons - pledged to address this in future years.

FurryCon's future location is still uncertain, though one proposal is to move to different cities each year, starting in Stockholm. However, a competition for next year's homepage mascot has begun. The theme? "Friendship and love . . . anthro style."