From WikiFur, the furry encyclopedia.
Jump to: navigation, search
from WikiFur News
May 21, 2007 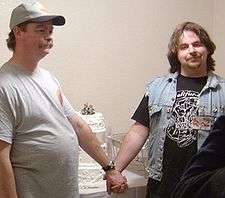 The late artist, fursuit designer and plush toy maker Pouchhopper will be leaving a legacy behind him. His husband Rainhopper is collecting funds to make a trip to spread Pouchhopper's ashes in the Australian outback, thanks to some very generous donations, all funds raised shall be donated to a local kangaroo sanctuary in his memory.[1]

Pouchhopper was a long-time member of the furry fandom, providing funding for ConFurence 0, and presenting several convention panels on fursuit construction and design. In recent years he suffered from cancer, resulting in scoliosis, though he remained dedicated to fandom activities. He died in his sleep at his home on May 6, aged 38.[2]

Donations via PayPal, money order, cashiers or personal check are being accepted through Rainhopper's email address, rainhopperroo@adelphia.net. Well-wishers have also been invited to send cards to Pouchhopper's mother through this address, and to leave their memories of Pouchhopper on his LiveJournal.