From WikiFur, the furry encyclopedia.
Jump to: navigation, search
from WikiFur News
February 3, 2008 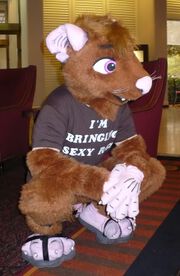 Further Confusion 2008, held January 24-28, broke both its own record for attendance and worldwide records for the number of fursuiters in the fursuit parade.

The exact number of fursuiters in the parade is disputed. Video evidence suggests at least 354 started the parade,[5] while photographs taken outside the gift shop suggest 371 at that point.[6] Conversely, an observer outside the dealers room reported only 352.[7] The official count, taken by an observer at the Coffee Garden, was 387.[1][4][8][9]

This year's theme - "The Fur East" - was reflected by the San Jose Taiko and a dragon leading the parade, followed by rats and other rodents honoring "The Year of the Rat" in the Chinese Zodiac.[10]

Popular Furry Night Live skits included "Fur in a box" (a remake of the Saturday Night Live skit), "Furry Deanimator", and "So you think you gangsta?". In Iron Artist the secret ingredient was painted vases,[11] with at least one challenger (Justin R. Bunny) emerging victorious over his selected artist.[12]

Further Confusion is next scheduled for January 22nd-26th, 2009 at the same hotel, the San Jose Doubletree.[1] As usual for the convention, the staff shifts from year to year; the title of chairman shifted from Bos'n C Otter to Frysco for 2009, with the more local Findra selected as Vice-Chair.[13]