From WikiFur, the furry encyclopedia.
Jump to: navigation, search
from WikiFur News
February 20, 2007 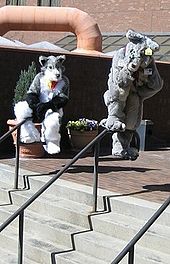 They didn't jump, but one fan did.[1] Image: Growly

Atlanta, Georgia, USA - The Sheraton Gateway Hotel was booked solid this weekend, as hundreds of fans descended upon Atlanta for a weekend of fur, fun . . . and, in one case, diving down the stairs.[2]

Furry Weekend Atlanta reported near-record growth this year, with paid attendance jumping 37% from 557 to 762, making it the 4th largest furry convention.[3] On numerical terms, this growth almost equals that of two years ago, when the number of con-goers nearly doubled from 270 to 500.

Last year's convention was cramped by the limitations of the local Holiday Inn, but the con staff has no fear of filling up their new residence just yet, as deputy head of Security HiNo Ookami noted:

Attendees were generally positive about the move, citing such factors as the increased size of the Dealers' Den and the quality of the rooms, although the pricing and availability of refreshments was a concern.[4]

The convention included a tribute to Kimberfox, a long-time fursuiter who died early this month.[5] Artists Strider Orion and Daria McGrain were present as guests of honor.[6] 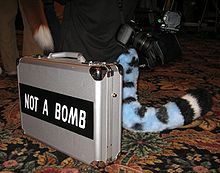