The winners of the 2007 Ursa Major Awards were announced this Saturday, at Morphicon 2008 in Columbus, Ohio.[1]

Nominees and award winners were chosen by popular vote through the preceding months. Each of the ten award categories had at least five nominations. In total, 201 ballots were received from fifteen countries.[2]

Six awards went to active fandom members, three of whom had won in the two preceding years. Author Kyell Gold won Best Novel and Best Short Fiction twice in the last three years, gaining both in the 2006 awards.

At least one winner, D.C. Simpson, was there to collect the award in person, being a guest of honor at the convention. It is the third time Simpson's Ozy and Millie has won the award in book or strip form. Despite the strip's imminent retirement, it may yet win a fourth award, as a final collection remains to be published.

The Ursa Major Awards were created in 2002 to celebrate the best works in the field of anthropomorphics, following a similar award for the "Best Anthropomorphics of the 20th Century", held at ConFurence 12 and covering live action and animated movies and television series.[3] 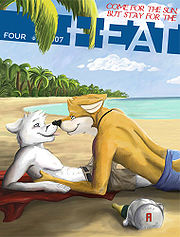