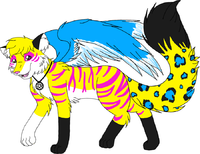 Nessie, as depicted by Nesbael herself

Nesbael is an American furry artist. Her fursona, Nessie, is her most easily recognizable trademark. It is a yellow wolf-like creature with pink tiger stripes on its body, black and blue leopard spots on its tail, and blue-jay wings. Nesbael has deemed the name of her fursona's hybrid breed to be a Leolf Tijay.

Her previous fursonas were a cat-like creature with impala horns (a species which she deemed an Impwolf), a pure white wolf with spectrum markings (an Iriwolf), and a tan and pink fennec fox/ferret hybrid (a Ferreox).[1]

Nesbael previously worked solely with traditional media, though now the majority of her art is done digitally; she uses the GIMP image editing program. Her requests and "art trades" are usually closed, though she does take commissions regularly.

Nesbael draws a mix between toony and realistic art. Her characters are often unrealistic (as far as colorations go) and usually sport extraordinary fur markings and colors. She is very partial to hybrid characters.

Nesbael has created a series of YouTube tutorials regarding how to go about creating a "preset" for the newly released game, FeralHeart (a newer form of Impressive Title).[2] She offers help to anyone seeking aid with the creation and programming of these "presets", and answers any questions she is asked about them.