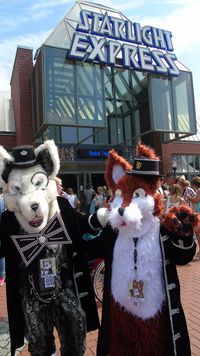 Nero and Rotanes at Starlight Express in Bochum

Nero and Rotanes are two fursuiters from North Rhine-Westphalia in Germany. They can mostly be seen in the Ruhr area, so some call them the Ruhrpottfurries.

Nero and Rotanes are a fox and a wolf, respectively, who wear black hats and coats. When drawn, Nero wears a golden clock with 13 hours around his neck.

They often show up at Charity and freelance festivals in NRW, and sometimes they can be seen in the Netherlands (for example at the Elf Fantasy Fair).

Sometimes they do very special things like leading a kinotherapy group in Bochum or stuffing a Plush at Build-A-Bear.

The newspaper WAZ wrote an article about Nero and Rotanes in November 2015. [1]

They also sometimes appeared on titel pictures in the newspaper.[2]

They were printed on the advertising posters for the Kidsday 2016 in the Railway Museum Bochum.

They were shown in an Tv Report by De Telegraaf and in the offical Trailer of the Elf fantasy fair Arcen 2016. [3] [4]

In January 2016 they were actors in a short film by the SAE Institute. The film was finished in March and is called Brain Vs. Muscles. [5]

There are Plushies of Nero and Rotanes, who travel with them all the time.

They were made to go with them at appearances and to replace them, in moments when they can't appear in costume.

Sometimes Nero and Rotanes have a baby stroller with them, with a plush wolf called King Mandibula, or simply Mandibula (Latin for Jawbone), inside it.

His name is an allusion to his open jaw.

Usually Action cams, a bubble machine and ballons are fixed on his stoller. The ballons are often given to children.