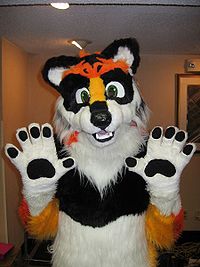 Neo PanTyger is a fursuiter from Baton Rouge, Louisiana, United States. He moved to Illinois around 2008 to attend grad school. His fursona is a Giant Panda/Bengal tiger hybrid. He is mated.

He is a member of the Louisiana Furs, and has attended RCFM, where he attended his first convention in 2007) and MFM. Neo won Best in Show at the MFM11 Masquerade for his "Elvis Pantyger" performance. He also performed with Bucktown Tiger.

Neo got third place in the Fandom's Favorite Fursuit Fracas 2008. He won in the Fursuit Dance competition at FWA 2009.

Several of Neo's videos have also been featured on the Funday PawPet Show.