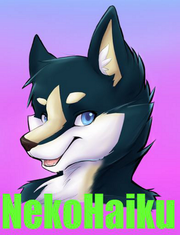 Neko Haiku (born September 8, 1987),[1] also known as just Neko (meaning "cat" in Japanese), Nekozuki~Kun on Gaia Online, and NekozukiKun on IMVU, is a DJ and fursuiter who resides in Cincinnati, Ohio, USA.[1] Having a dog-like avatar, Neko jokes that he is "the only canine with a feline name".

Neko lives with Family. Neko's father left the family back in 2003. Neko has a daughter who was born August, 2010. Neko works at a IT help desk and is an experienced IT technician. Neko has previously worked full-time at a collection agency. He has an interest in computer forensics.

Neko is the Co-Administrator of the OhioFurs[2] group on Fur Affinity since June of 2011. Neko has since built a list of the Ohio Furs by county and has been more active in the furry fandom. Neko is also a moderator of the Cincinnati Tri-state furgroup Second Haven. Neko is a FurSuiter with his suit made by a local Cincinnati fur. July 2012 Neko Commissioned the Fursuit maker MadeFurYou for a V2 Full Suit which Was debuted at Anthrocon 2013.

Neko can be found on IMVU, where he likes to change the way his avatar looks, going from a husky to a cat or an ocelot. He also has a few dog, fox, and wolf skins, but he prefers to remain an ocelot or a husky.

Neko can be found on Second Life. Neko was a DJ at The Yiff Factory. As of August, 2011, he is still a DJ but not assigned to any clubs.

Neko is a fursuiter with his suit named after himself [3]. He is a husky that loves to chat with just about everyone he meets. He first appeared at Anthrocon 2012 and plans on returning there yearly. The head itelf was made by Para030 and furred by Iko.