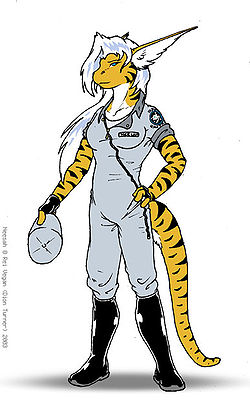 Neesah at ease - more or less

The creation of furry artist Rei Vegan, Neesah currently is seen online as the captain of the DSV Nautica. Originally, Neesah was a sketch created out of boredom who eventally grew to Rei Vegan's most notable character. Earlier renderings depict the tiger/dragon hybrid with wings and azure eyes. The change in her appearance is deliberate, though not nessesarily permanent.

As for Neesah's role in the DSV Nautica webcomic, she never intended to become the captain of a DSV, Neesah rose in the ranks simply because her superiors had to retire before her. She's not captain in rank only however; she has the capacity for the rigors of captainhood, and is regarded as one of the most seasoned and qualified officers in the deep space fleet. Her longevity may make one think she's old, but her species (what ever it might be) is incredibly long-lived; their life span ten times that of most species.