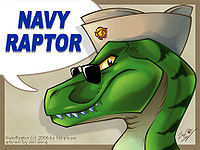 Navyraptor as drawn by Spunky.

Navyraptor, also known as Navyraptor06 (born 1984), is a furry writer, MILFur and professional airline pilot who lives with his mate, Tally.

In May of 2006, Navyraptor graduated from the U.S. Naval Academy,[1] and was commissioned as an Ensign in the U.S. Navy.

Upon graduation, he transferred to Naval Air Station Pensacola, Florida (NAS Pensacola), whereas he spent one-and-a-half years training to fly in both the Beechcraft T-34 Mentor and the Bell 206 TH-57 Sea Ranger. Following his training, he flew the U.S. Navy's Sikorsky SH-60 Seahawk, logging more than 800 flight hours during two deployments totaling 16 months at sea.

He was separated from active duty on 2018,[2] and transfered to the United States Navy Reserve.[3]

Navyraptor has been a member of the furry fandom since 2005, although he has been involved with the otherkin community since at least 2003.

Navyraptor's fursona is a dark green, winged raptor, or dracoraptor.