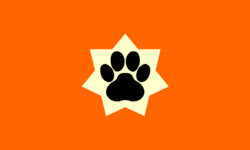 Nationalist Furries, also known as Furry Nationalism, was a short-lived movement, created (and mostly dissolved) by SciuCaro (Santo C.) in 2005, to promote a more exotic, sovereign, nation-like spirit in the furry community.

Long before Santo (a general nationalist himself) encountered Furry online drama on LiveJournal, he was really into the cultural beauty of the furry community. One day, he saw a video on an exotic dance, called the Lambada and it inspired him to expand the Furry culture on things like that and other establishments for Furry, such as architecture, music styling, cuisines, sports, language arts, traditions, holidays, etc.

He figured it would be an even better aspect for Furry to be real deep and cultural, to the point it would feel like a nation, instead of being regarded as just another geek fandom.

Santo created the LJ community,   nationalist_fur, on March 25 2005, to start a hub for the group. When he brought the idea to attention on a few LJ communities, it had a handful of favorable opinions, others detesting it.

Because it was Santo's first taste into online drama, a 9-day flamewar went on during a two-week period in April 2005, ending in stalemate, and since then the community has been on hiatus, and practically ceased over the months, thus ending the movement's activity.

The community activity has mostly ceased. However, Santo keeps the original ideals to himself, and welcomes anyone to share it with him.

Because Santo doesn't like the general direction that Furry is evolving to (because of the many controversial issues revolving around it, as well as the excessive cultural diffusion with pop cybercultures,) he plans on making a splinter community for people who feel that the community is becoming very well below their expectations and want a higher platform of original identity still remarking themselves as "Furry" because they will always be one, first and foremost.

Furry Nationalism is the idea that because there are Furries that have felt their animal side in them all of their life before finding the Furry Fandom, there is a binding spirit that makes these 'latent Furries' have the basic foundation to a sub-nation, as opposed to being just "Furries/Furry Fans".

The goal was to provide more cultural foundation on these "Furry roots" and to make it stand out as a fresh cultural identity, as if being a Furry was almost like a nationality, if not exactly that.

There are a number of things that stand out in the views of Furry Nationalism:

As well as being patriotic and proud of being a Furry, it was also ideal to live a Furry lifestyle, especially species-specific, to help keep the unique animal-like culture vivid. The vision was to have the Furries live it almost completely Furry, or at least the specific species the person identified with, which is very similar to the much older practice of Furry Lifestylers.

It was even encouraged that each species be regarded as "individual states in the common union", which furthered solidarity for Furries of the same species. This also helped keep everything within the Furry nation have some variety instead of staying conformed to just the mother nationality.