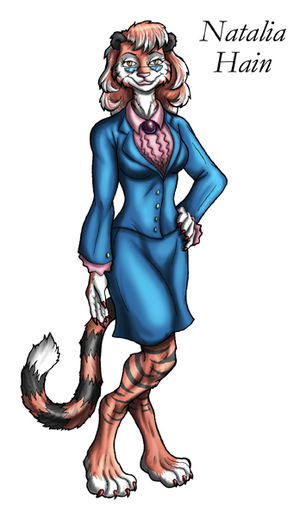 Mrs. Ramas is on the executive board in charge of the superhero team Zodiac and an employee of the New Dawn Corporation.

Little of Ms. Hain's personal history is public. However, what is known has caused her to be heralded by some as a hero for what women can accomplish and demonized by others as a master manipulator and possible harlot.

What is known is that Natalia traveled the world at a very young age working many jobs such as translator, negotiator and diplomat. While cementing her reputation and career, she was courted by a man of extreme wealth but would not marry him until she found a stable career for herself. She was hired by New Dawn while still in her late teens as a public relations assistant and agreed to marry but did not give up her career for a life of luxury. Instead, she advised her husband to invest in the company and together they weilded a huge amount of influence there until her promotion as head of public relations and her husband's untimely death.

Natalia's history reads very pleasantly on the surface but she keeps her private life well hidden and many people believe that she is likely one of the most ambitious and manipulative people in the business world. Rumors abound of what she has done to reach her lofty position but most are obviously born of jealousy at a woman who has everything.

Currently, Natalia has accepted what most feel is a demotion to handle the Zodiac team of superheroes of which her grandson Gabriel is a member. Gabriel's parents are independently wealthy and Natalia has been a parent and teacher to the young genius more than anyone else.