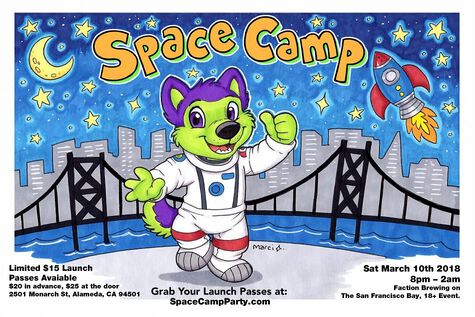 The first Galactic Camp (then known as Space Camp Party) was held as part of Nacho Husky's 30th birthday celebrations.[2]

Nacho's main fursona is a purple and green husky, though he also has two offshoots: Space Nacho and Pup Nacho, his little and leather puppy play fursonas. Nacho Husky's big belly is bright neon (UV reactive) green, and he loves to dance, frolic, hug and do other silly things. He also wears a blue collar with his name on it.

Nacho's fursuit was built by That's Furred Up!.[3]