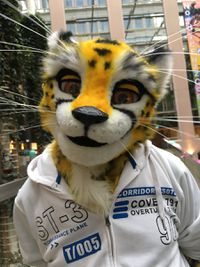 Mystic-Creatures is an artistic costume and design studio, founded by Mystifur and based in Hamburg, Germany.

Mystifur started taking costume commissions around 2005, and created the label 'Mystic-Creatures' in 2008, when he turned from livingroom tinkering to professional production in his own workshop. In 2013 he presented first costumes with entirely 3D printed heads.

Heads were initially sculped in clay on the clients head cast, and then a fibreglass shell was created from it. This allowed for very small and tight fitting fursuit heads. Today most designs are created with the help of 3D design and printing. Costume bodies are thread&needle work, with higher priced quality faux-furs. Requests to use a cheaper fun-fur are often turned down, with the reason given being their short lifespan. All kinds of methods are used to achieve the desired final look. Resin-,silicone- and rubber- casting, airbrushing, metalworks and mechanical engineering, electronics, 3D printing.

Mystic-Creatures is open for quotes all year around. The turnaround time after a commission is accepted can be from 2 months to about a year. They currently do not produce costumes for auctions, but will often bring a ready made fursuit or head to the Eurofurence dealers den.