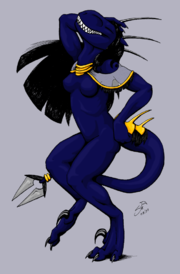 Myra Midnight (born 1987), is a anthro artist from Reykjavik, Iceland, sometimes known as dark-stardragon. She discovered the fandom around 2004, but considers herself to be dragonkin if anything. A member of Dorg since 2010 (was inactive for the longest time until 2018).

Myra Midnight (pronounced Me-Ra) is a midnight/navy blue dragoness with silky black hair and green eyes. Along her neck and tail are black spikes growing from her spine, and a double-edged, diamond-shaped blade on her tail tip. She rarely has wings when anthro.

She happens to be one of the founding members of the IcelandFurs group since around 2006 and maintains their website.