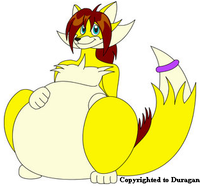 The Myox is a hybrid creature that was created by Duragan. They are a mixture of fox, wolf, lynx and cat. The myox is recognized for their Lainen, long fluffy tails and their big bellies. The myox are loyal as pets and as wild animals. They are also regarded as highly respectable creatures for their incredible intellegence - being able to speak our language and learn to read and write - and their love for the world.

The myox is seen to many as an adorable creature that has a colourful personality and lovable belly to rub.

The myox origins began with the start of a contest on deviantART for a mascot in the Chubby Furs fanclub. Duragan's entry came in as a minx character who was later named Renita. Although he didn't win the contest, he still kept his creature for future use. The idea of creating the myox came from some random doodling until the creator came up with the idea of making the myox a 4 legged creature rather then another anthropomorphic being. Soon enough the creator created a small bandwagon for people who took a particular interest in the myox and have since been happily producing their own drawings.