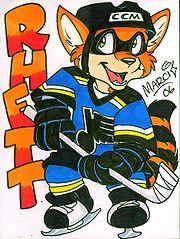 Rhett Foxcoon (born December 11, 1981) is furry who lives in Texas, United States. His fursona is a 5'11" anthro foxcoon (fox/raccoon hybrid). He has all the features of a red fox, with a raccoon's black mask around his eyes and a striped tail. His fur pattern follows that of most other red foxes, except that in place of white underbelly fur, his a light brownish-tan color, extending down between his legs.

Rhett as high school mascot in 1998

Rhett has been fascinated with costumed characters for as long as he can remember. Since he was little, he's always wanted to be the one, "inside the costume". Strangely enough, however, he does have a fear of clowns.

In 1997, one of his dreams became a reality, as he was voted as his high school's Tiger mascot during his sophomore year in Bentonville. He decided to move into backup duty during his junior and senior years, filling in when needed.

It wasn't until the airing of Sex2K in 2001 that Rhett realized that there were others that shared in his interests.

Rhett is currently attending the University of Arkansas, in hopes of attaining a B.S. degree in Sports Management.

Rhett as Mynt at MFM 2008, along with his friend Harley on the left.

In 2005, Rhett commissioned a set of footpaws and a foxcoon tail from Mixed Candy. Later that year, he purchased the original head from the Dynamite suit from CloudPouncer to complete a partial fursuit. He has since sold the head, but has retained the tail and paws.

In August of 2007, Rhett purchased his first full fursuit from Soki Twopaw, a green husky named Mynt. Mynt has attended six cons as of MFF 2008.