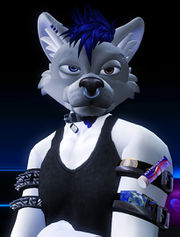 Myke Patton is a furry musician from Ontario, Canada.

Myke Patton is known for being a DJ at a few clubs on Second Life, and with Kiroja, they own the Gay Yiffy Club (GYC).

Myke has always been a hyena at heart. On SL he has used several other species avatars; including crux, rat, wolf and husky. His profile describes his character's disposition as "Sweet and Sour".

Myke used to be a frequent Mp3-J on Second Life, though is a session musician in RL. Myke used to work at several Second Life's clubs, but has now settled into co-ownership of GYC. He helps fellow co-owner Kiroja maintain its inner-workings, and thus can usually be found there.

His screen name is somewhat of an homage to the real Mike Patton, of whom Myke has been a fan since 1990.

Myke has been a session musician since 1995 and has worked with/performed with several bands. He has also commissioned pieces for public radio, thematic and atmospheric music for independent films.