My Gym Partner's a Monkey 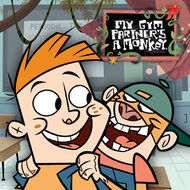 My Gym Partner's a Monkey is an American animated television series created by Tim Cahill and Julie McNally-Cahill and produced by Cartoon Network Studios. It premiered on Cartoon Network on December 26, 2005. It consists of fifty two episodes spanning over four seasons in total. A TV movie based on the series premiered in 2007 called "The Big Field Trip".

The story revolves around Adam Lyon, a human who, after a clerical error listed his surname as "Lion," is forced to transfer to Charles Darwin Middle School, a school for local anthropomorphic zoo animals, where he is partnered with Jake Spidermonkey (a monkey) in gym, with whom he quickly becomes best friends.