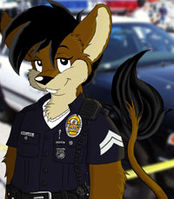 He lives in Wolverhampton, having previously resided in Lichfield, Staffordshire, England. 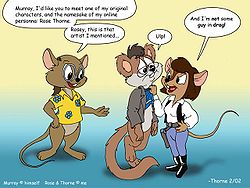 A moment of interaction between Thorne Mouse and Murray

Murray originally came in contact with the furry fandom through his affiliation to the "Tiny Toon Adventures FanFiction Mailing List" while at college where he started regularly interacting with the artistic element of the mailer through conversation, and the occasional one panel running comic-like imagery that used to be quite common on the list.

Originally his fur coloration was grey and brown, but this was later altered to tan and brown for aesthetic reasons. His tail also changes from thin with a more mane like tip, to quite a thick fluffy appearance, depending on what time of the year the image has been drawn. (explained away as "winter coat")

Glasses also make an appearance about his face on occasion, originally they always appeared, but with the advent of the real life Murrays use of contact lenses on occasion, they appear less commonly in his artwork of recent.

Murray's ears have also altered since his first appearance, as can be seen by comparing the older image of Murray by Thorne mouse on this very page, and the recent image of Murray at the top right of this page.

This alteration came about after the realization that the original design for the ears was ill equipped to convey emotions, thinner, more rodent like ears could flop, lower, or raise to indicate different moods, so this path was happily taken.

The name "Murray" can be attributed entirely to a single episode of Stargate SG-1, in where an alien unaware of his own identity *as* an alien being repeatedly calls Teal'c "Murray" (a name Teal'c begrudgingly accepted as they were undercover at the time.)

Murrays full name is Murray Lanigera, being part of a Latin name for a Chinchilla which when translated meant "long-tail" (Chinchilla Lanigera.) Nowadays Murray mostly goes by the nickname of Murries, which was used by friends in the Midlands area of the UK, and stuck.

Murrays alternate alias is Omega256, which most of his older artwork was signed with.

Murray has attended Anthrocon 2003, and 2004 where he met up with several members of the TTAF mailing list. He also attended RBW 2007 in the United Kingdom.

Murries is an avid Airsoft gun collector/player, and has collected a small arsenal in his 3-4 years playing the sport. He also has a fair amount of military and paramilitary costumes due to the cosplay element of the sport.

He also has recently become interested in the Warhammer 40k Tabletop game, and his chosen Army is The Imperial Guard.

Murries also has a notable interest in the Los Angeles Police Department, regularly portraying his character dressed as an LAPD Patrolman.