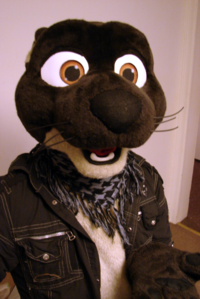 Mozee is a fursuiter who lives in New York State. His fursona is a river otter.

Mozee has been active in the fandom since 2005. He attended his first convention, Anthrocon, in 2007.

Mozee's fursuit was constructed by Arend Studios, and debuted at Anthrocon 2008.[1]

Mozee is fond of rhythm games such as Pump It Up, beatmania IIDX, and Dance Dance Revolution. He is also fond of dancing, particularly of pop-and-lock style dance. In addition, his pastimes include aggressive inline skating and freestyle scootering.