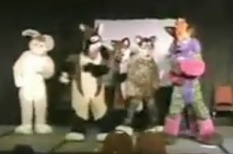 "Move Your Dead Bones" is a techno Eurodance song by Dr. Re-Animator. The song originates from a music video on the DVD to the horror/comedy film Beyond Re-Animator. The song itself is found on the compilation album Disco Estrella 2003, also known as Disco Estrella Volume 6. The quirky song and video feature a well-manicured European scientist singing in a very gruff voice that is modified with an Auto-Tune. The song was written and produced by Jordi Cubino, who is best known as David Lyme, one of the most successful performers of Italo-Disco music from Spain in the 1980's.

This track was made popular among the furry fandom by a music video entirely animated in Flash by Zarla, which comically poked fun at the world of slash (and was not intended as a furry work).[1] Zarla's video features a wide variety of characters borrowed from different fictional settings, including:

The animation spread quickly thanks to a posting by Arcturus on his LiveJournal and from there, subsequent postings to fchan. In 2006, the Megaplex variety show included a performance of the song in fursuit (starting off rather ominously with a scene of dead fursuiters). A re-enactment of the reanimation scene from the movie was performed during the Further Confusion 2007 Furry Night Live variety show, and won first place.[2]