Mousechievous is an adventure/comedy/fan service webcomic originally drawn by Skidd and written by Xivk. A reboot began in 2019, which is created by Skidd and Phuufy.[1] The original webcomic has since been removed. As of right now, the current webcomic updates on an irregular basis...from as often as weekly to as long as monthly.

In order to avoid worker resources from reprimanding her, an unnamed boss forces Jasmine to take some vacation since she has hardly taken any time off for years. Jasmine, a loyal employ who really loves to work, pouts in the lobby after her idea of changing her name was shot down. Macie, a fellow co-worker, suggests that Jasmine takes up bug hunting; however, it is the cold season. Macie then recommends that Jasmine take a tropical getaway.

After a quick change in clothes and airplane ride, Jasmine arrives at her tropical destination. While at the airport, Jasmine bumps into a seated passenger with her chest. Regaining his composure, the passenger introduces himself as Resan, a local tour guide. Resan eagerly grabs hold of Jasmine and drags her out of the airport and away from her true tour guide. As they continue to head outside, Resan explains that they’re avoiding the over- crowded shuttle buses in favor of a personal tour. Resan introduces Jasmine to Jeff, their driver. Waking him up from his nap, Jeff inadvertently reveals Resan’s real name, Baxter. Baxter initially tries to brush off Jeff’s revelation but is forced to draw his gun whenever Jasmine tries to respectfully excuse herself. Jasmine gets into the jeep, leaving her luggage behind.

During the drive, Jasmine tries to gather information from Baxter and Jeff but is quickly hushed. Terrified, Jasmine tries to come up with an idea to save herself and does so thanks to Baxter and Jeff pointing out her body. Jasmine pretends to be turned on with being captured in order to lower Baxter and Jeff’s defenses. Jeff initially tries to grab for a feel but is denied access since he is driving. Baxter goes in for a feel; however, before Baxter could get his chance, Jasmine inhales air and holds her breath in order to expand her chest and pop the buttons off of her top. One of the buttons hit Baxter’s right eye, causing him to discharge his firearm into the jeep. While Jeff regains control of the jeep and during his verbal fighting with Baxter, Jasmine slips out of the jeep and slips into the bushes. Baxter tries to find her but gives up upon hearing the sirens. Jasmine waves the police down. After a brief introduction and explanation, the police officer offers to take Jasmine back to the stations to get cleaned up and clothed. 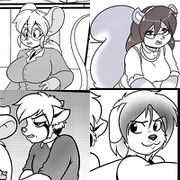 Jasmine is the central protagonist for Mousechievous. After her boss rejects her idea of changing her name so that she can while on vacation, Jasmine bouts in the lobby as she really loves her job until Macie, a fellow coworker, suggests she takes up bug hunting at a tropical getaway. Once at her destination, Jasmine encounters Baxter, a criminal that introduces himself as a tour guide. Despite her best efforts to respectfully decline Baxter’s invitation, Jasmine is forced into the jeep. Terrified of her kidnappers, Jasmine uses her sex appeal to distract her kidnappers and escape during the ruckus. Whenever the police drive by, Jasmine quickly waves the car down. Jasmine is taken back to the station to get cleaned up and clothed.

Macie is Jasmine’s coworker who suggested she takes a tropical vacation to go bug hunting.

Initially introducing himself as Resan, Baxter tricks Jasmine into believing that he is a legitimate tour guide; however, Jeff’s demeanor toward woman and reveal Baxter’s real name causes him to grab his gun and threaten Jasmine into the jeep. Discussing their plan to use her as part of a job, Baxter is surprised whenever Jasmine appears turned on with the kidnapping and takes her up on her offer to feel her chest. Caught off guard with the trap, Baxter regains his composure from the button to the eye and searches for Jasmine in the brushes. Baxter quickly leaves Jasmine behind after hearing police sirens coming their way. Part of “The Kidnappers,” Baxter appears to be the brains of the operations.

Unaware of what his partner is doing, Jeff inadvertently reveals Baxter’s real name after waking up from his nap. Jeff’s demeanor towards Jasmine tips her off that something is wrong here and tries to escape. While driving, Jeff tries to grope Jasmin, which Baxter denies. Jeff is nearly shot as the result of Jasmine’s trap. Part of “The Kidnappers,” Jeff appears to be the driver.