Mouseboy is a controversial fan artist of furry Disney characters, that is almost exclusively characters of the Duck clan, from Darkwing Duck, as well as Micky, Goofy, and Minnie. His art is mature to adult. 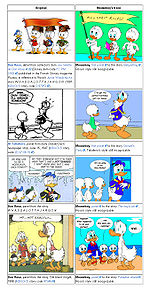 Mouseboy's art is both controversial and widespread enough that he has his own biography on Encyclopædia Dramatica. His art is controversial for two reasons:

Mouseboy publishes his stories not as whole comic pages but as individual panels. This makes his stories rather inaccessible, especially in re-posts, often made for ridiculing purposes, of single images on imageboards. Notwithstanding, his output is notable, in fact quite remarkable in the high amount of artworks he has amassed over the years. As of summer 2009, 6,192 indiviual panels adding up to 53 stories by Mouseboy are found on his Smuttytoons site; thus, his amount of panels per story averages at about 117 panels, even though individual Mouseboy stories can range from 3 (as is the case with Its Cool to be Nude) up to 340 panels (Campout).

Mouseboy freely admits to tracing all his art from published professional Disney artists[1], as is a little known fact about his art. Due to this, his characters actually change their style from panel to panel, while the original artist's style remains recognizable. The major difference in their final appearance is probably that professional artists receive more sophisticated coloring.

The wide range of originals traced by Mouseboy suggests that he has an almost encyclopedic access to 70 years of published Disney comics around the world, including artists such as Don Rosa, Carl Barks, Al Taliaferro, Daan Jippes, Freddy Milton, Tony Strobl, William van Horn, Giorgio Cavazzano, and many others.

Mouseboy differs in this aspect from Kthanid who he is often mistaken for. Kthanid draws his art freely, and in fact hardly ever has the same choice for characters as does Mouseboy. Kthanid draws adult fan art of a very wide range of furry characters, while Mouseboy has a very restricted range of recurring characters whom Kthanid hardly uses, if ever.