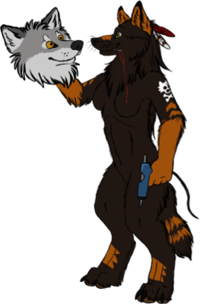 Motomo Wahots, also known as Vlcek (born January 11, 1995),[1] is a furry artist and fursuit maker who lives in the Czech Republic. She is mated to Werewolf66.[2]

Motomo Wahots and Werewolf66 have made fursuits together since 2010, and founded WMW66 Costumes in 2013.[3] She is responsible for the appearance of suits, communication with customers, making bases and moulds, furring heads, sewing bodysuits and making paws.[3]

Motomo Wahots's fursona is a female wolf with black fur with orange markings, wolf skull markings on both arms and the number 66 on her back. Her left eye is green and the right eye is yellow.[5]

Another character of Motomo is Woyote, mix of wolf and coyote. Woyote was made as into a toony fursuit in February 2018.