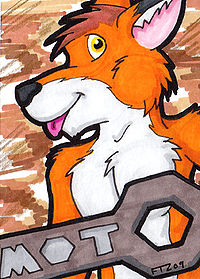 Motofox was formally introduced to the furry fandom in 2008 by his friend, Riley Westwolf, but he had been interested in anthropomorphism for years before that. His fursona is a red fox and he can often be found on FurryMUCK. He has recently had a fursuit created by Fritzy Wolf and is waiting for MFF09 or possibly AC09 for its first debut.

As of January, 2009, Motofox attends Oakton Community College in Des Plaines, Illinois. He is a state licensed security guard but, due to conflicts with his school scheduling, he works at a McDonald's in Park Ridge, Illinois.

Motofox spends his free time working on his motorcycle and moped with Karuza, and his other hobbies include: working on things with motors, photography, astronomy, 3D illustration, building computers, and PC gaming.