From WikiFur, the furry encyclopedia.
(Redirected from Moonlight Frost)
Jump to: navigation, search 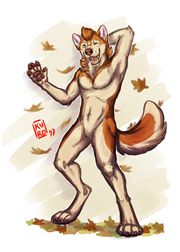 Ouskie (pronounced Oooh-skee) is a maple husky from Charleston, South Carolina. He is married to his mate, Rawley, whom he refers to as his "fuzzband".

A culinary fur, who has been working in the F&B industry for most of his life, Ouskie finds his passion in cooking, baking, and brewing beer.

Often described by his closest friends as "painfully adept at extroversion", he often hosts local meets at his home, aptly named Doghouse, which is in its third iteration.

Ouskie used to live in Florida, where he started acting with a Medieval Fair. It is through there that he learned both stage- and medieval European combat.