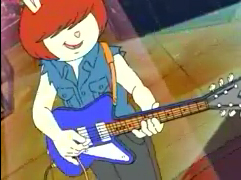 Molly playing the guitar at a concert.

Molly MacDonald is a fictional character in the Marc Brown television series Arthur. Molly, who is an anthropomorphic rabbit, is close friends with Binky, and is a member of Elwood City's local gang of bullies, The Tough Customers. Contrary to her tough appearance she is also known to be good at giving advice. Molly is a tomboy who enjoys skateboarding and playing the guitar. Molly, along with several of Arthur's friends, create a rock band called U-Stink in the It's Only Rock 'n' Roll special. In the episode, the band ends up performing with the Backstreet Boys.

Molly usually dresses in a blue jean jacket with torn off sleeves, blue jeans, and sneakers.