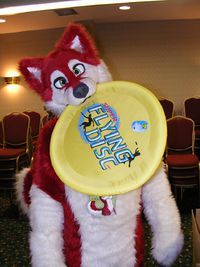 Gauge (born August 18, 1985) also known as Mith, is a Canadian fursuiter whose fursona, originally a snow leopard, is a red and white malamute.

Gauge can be quite often found at Midwest FurFest and Furnal Equinox, and has been known to venture to Anthrocon, Condition and Furry Weekend Atlanta.

Gauge's snow leopard fursuit was made by Kodi Pup. His malamute fursuit was built by Noble Wolf[1] in 2009. In 2011, he replaced the head with one by FireStorm Six.