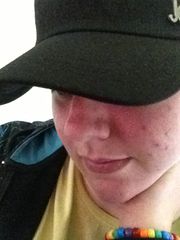 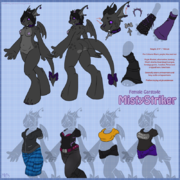 MistyStriker, also known as Misty and Oboroten Dorn on Second Life, is a furry artist from Brisbane, Queensland, Australia, who lives in Geelong, Victoria, and will be studying Computer Assembly & Repair and Information Technology in 2015. She is in a long distance relationship with Nithcraal, a British gargoyle.

MistyStriker's fursona is a female gargoyle. She has black eyes with glowing purple cornea and pupils, short black hair, stubby horns and purple claws that also glow softly. She also has undersized bat-wings that are definitely more cosmetic than actually useful. Misty's body is fairly chubby and bottom-heavy, with small B/C-cup breasts and large hips, rump and thighs. Her legs are digitigrade style, and she has dragonesque earfins and sabre-like fangs.

Misty has numerous facial piercings, with four purple bridge-style on her muzzle, a black ring on her left eyebrow, three purple rings on the middle tine of each earfin, and a purple dangly star from the top of her left earfin. She always wears a purple and black collar with a bone-shaped tag that reads "Lil Sis", and a black cord necklace with a silver Tiwaz rune pendant.

Her personal style is more tomboyish than feminine. She prefers short shorts or baggy knee-length cargo shorts over skirts or dresses, though she will them on occasion. Her t-shirts are usually grungy, geeky or cute and her favourite colours are black, purple, red, blue and gold. She also loves to wear armwarmers and legwarmers, and always has a purple bow tied around her tail just above the spaded tip. Despite her chubbiness, Misty doesn't mind wearing cropped tops or clothing that accentuates her booty. Her favourite style of underwear are boyshorts.

Misty has been drawing furries since she found Furcadia back in 2000. She primarily posts her art on Fur Affinity, but also maintains galleries on many of the secondary furry art communities. She primarily works in a digital medium, only occasionally sketching on paper but generally preferring to use her Wacom Intuos and Clip Studio Paint. She does not take requests, preferring to open semi-regularly for commissions, and occasionally takes on art trades.