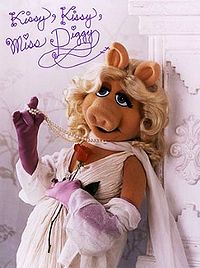 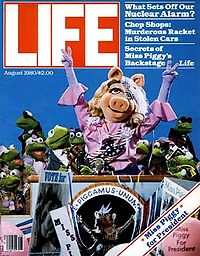 Miss Piggy for President! An actual Life Magazine cover from 1980. 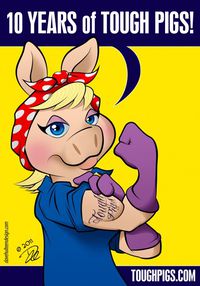 Miss Piggy as Rosie the Riveter for the anniversary of Toughpighs.com

Miss Piggy is an anthropomorphic pig puppet and one of the central characters on The Muppet Show who developed from a one-joke running gag into a complex, three-dimensional character.

Miss Piggy is absolutely convinced that she's destined for stardom, and nothing is going to stand in her way. Her public face tries to be the soul of feminine charm, but she can instantly fly into a violent rage whenever she thinks she's insulted or thwarted. Kermit the Frog has learned this all too well, since he's the usual target for her karate chops. When she isn't sending him flying through the air, she is often smothering him in (mostly unwanted) kisses.

Throughout the TV show Miss Piggy has repeatedly and unsuccessfully attempted to get Kermit to marry her. She has tried writing a "comedy sketch" about her and Kermit getting married, getting Scooter to trick Kermit into signing a marriage license and hiring a real minister to portray the minister in the sketch. However, during the skit, before Kermit was to say "I do", he refrained himself and introduced Lew Zealand instead. Eventually in the films, Kermit started returning her affections and (unwittingly) married her in The Muppets Take Manhattan.

The first draft of the puppet was a blonde, beady-eyed pig who appeared briefly in the 1975 pilot special, The Muppet Show: Sex and Violence, in a sketch called "Return to Beneath the Planet of the Pigs." She was unnamed in that show, but by the time The Muppet Show began in 1976, she was recognizably Miss Piggy -- sporting large blue eyes, wearing a flowing white gown, and jumping on Kermit, the love of her life. The fact that she was intended to be a bit player is reflected in her formulaic name, which was patterned after Miss Mousey, Kermit's love interest in the 1974 special The Muppet Valentine Show.

When the idea for Miss Piggy was originally conceived in the early 1970s, the puppet was called 'Miss Piggy Lee' - a parody of the singer Peggy Lee. Almost immediately, the 'Lee' part of the name was dropped, and by the first season of The Muppet Show in 1976, she was known as Miss Piggy.

Miss Piggy soon developed into a major character, as the Muppet creators recognized that a lovelorn pig could be more than a one-note running gag. Frank Oz has said that while Fozzie Bear is a two-dimensional character, and Animal has no dimensions, Miss Piggy is one of the few Muppets to be fully realized in three dimensions.