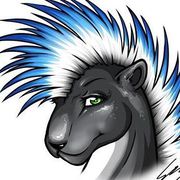 Mis0 is a furry who lives in Glasgow, Scotland UK. Mis0 has been in the furry community since the mid-1990s. Its fursona is a shapeshifting skunkupine (skunk-porcupine hybrid), the skunkupine, with a cobalt central stripe, being its normal form most of the time. It's also been seen as a penguin, a grey, lop-eared bunny with black spots (one over its left eye), and other forms. It has been a professional dance instructor since 1992. It also teaches yoga and other adult education subjects.

Mis0 was on staff of Furry Fiesta as the Music and Motion Lead - teaching panels on yoga, dance and other physical/musical panels. It also hosted the formal (or sometimes informal) ball at TFF every year and has been teaching panels at Furry Fiesta since it first began.

It'd been, quite literally, bribed to join as the only non-male panelist on the TFF "Match Game", where the more vulgar staff members come up with the most impossible and hilarious fill-in-the-blanks to foil the contestants. It's also been bribed to serve as one of the judges as well as "Entertain the Staff for Small Prizes".

The Music & Motion department originated from yoga and meditation panels (2009-2011) into ballroom and other social dance classes and more formalized/mature dance events (20011-20017), appealing to attendees who desire a more structured and varied dance environment, as well as those who want to learn new moves and styles apart from typical "wubwub rooms". It has also, playfully been referred to as "Grey Muzzle Activities" as most of the panels and events it hosts are "adults only", less for content than interest and physical safety.

In the early development of its moniker, Orim Katsu (the department's DJ and very first Minion) suggested the "Music and Motion" or "M&M" department and took on the term "Minion" as the departmental staff term, thus making everyone in the department "MMM's". Being that the M&M department is heavily involved in dedicating their panels/events to the themes of the con, both Mis0 and the Minions frequently adopt various character names to match every year's theme, making the entire department somewhat "shapeshifting" itself.