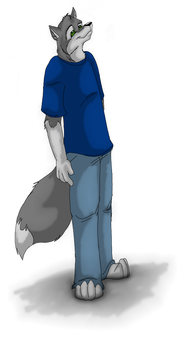 Mikune Folf's fursona. Art by Makki_Wolf. This was the first ever picture of Mikune that was done by an artist.

Mikune has always loved anthropomorphic animals, and declared himself a furry towards the end of 2008 but was involved in the fandom in early 2007. He loves furry art, and enjoys drawing, painting models and playing video games. He has an interest in history, ranging from ancient to modern times as well as Numismatics, Militaria and Warhammer 40K. He often takes photographs at furmeets and uploads the best to his Fur Affinity account. He sometimes takes photographs whilst at ConFuzzled as well as occasionally acting as a handler for fursuiting friends. He often creates furry-related artwork and has done so for over 16 years. At around age 5 he developed a fondness for anthropomorphic animals which slowly grew over the years of watching cartoons and other mediums that included anthropomorphic animals, such as video games and books. As well as imagining himself as one and drawing and writing stories about them.

Mikune began his first furry forum activity on Furry Teens but left once he felt he had outgrown the site. He used to be a member of the now defunct Furspace and MyFursona. Mikune was also fairly active on the UKFurs forum. He also served a brief spell as a helper on the official SoFurry Minecraft Server.[citation needed] He chose to sponsor WikiFur as he finds the website an invaluable resource and guide to the furry fandom.

Mikune attended his first furmeet in Leeds in October 30, 2010 and continues to attend other meets in the area (including the minimeet equivalents of some meets) and elsewhere. He also attends and has attended furmeets in other locations such as Sheffield, Liverpool, York, Manchester, Llandudno and Birmingham. The first furry convention he attended was ConFuzzled 2013.

Mikune became a fursuiter on July 25, 2013. His fursuit, a partial of his fursona, was constructed by Made By Mercury.[3] His first outing in fursuit was at the Manchester mini-meet in August 10, 2013.

Mikune's fursona (pronounced .mick-une/mike-oon) is a folf. He is 6 feet, 2 inches (1.88 meters), is of a larger build and is grey colored with light grey markings on his face, chest, paws and feet. His headfur is incorporated into his body fur. He also has a light grey tip on the end of his foxish tail. Mikune is one percent more fox than wolf, but looks the same as any other folf. He usually wears a dark blue shirt and black jeans with no shoes.

Mikune has a character named Inky Wells. He is a light blue fox who sports darker blue tattoos and markings on his body, and is quite slender yet a little muscular. Inky has black splodgy markings on his paws, feet and tail, as if they have been dipped into ink, which is where his name comes from. He has black hair, and a long fluffy tail like all foxes. Often seen wearing little to no clothing, he likes to show off somewhat in his red boxer shorts. Inky is also the frontman and guitarist of a Thrash metal band.

He also has a character named Valentina Vulpin. Valentina Vulpin is a dark pink coloured vixen. She has dark hair and intelligent golden eyes. She's a bit of a femme-fatale, a trickster and a thief all in one package!

Mikune enjoys most types of music, but his all time favourite genres are metal and 80's pop. He likes bands such as Rammstein, Dethklok, Slayer, Iron Maiden, Alestorm, Soft Cell, Pet Shop Boys and the Human League.