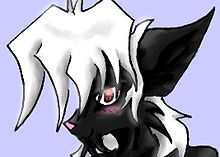 Cosaco (or Cossack in proper English, and Казаки (read Kazaki) in Russian) is a male 'Birano': a species of feline and one of the oldest mammals along with Man.

He's the personal fursona of the furry artist Miguel Guevara, and is the main character of the Histories written by Vladimir Anthromovitch & Guevara.

His name makes reference to the soldiers who fought side to side with the Bolsheviks for the liberation of Czarist Russia.

He's a black cat with white hair and a fondness for big swords and Socialist ideas. Cosaco is also known as Kocako, Ulan Bator and 'The Dark One'. 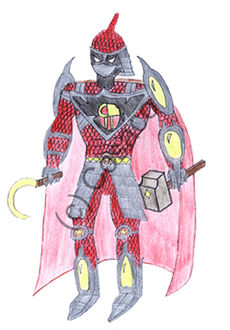 'Cosaco's' concept born in August of 2002, in that time he was everything except a Furry; his name was only Ulan Bator; a direct reference to what his creators believed he was: a Red Hero.

It's clearly that the idea was to make a Super-Hero; there's the typical red cape, the uncommon armor influenced by Russians designs, the mask that hides his identity, the Sickle and the Hammer from the Red Flag as weapons and finally: a remade concept of the international symbol of Socialism on the chest.

Later, all these concepts were rejected, mostly because the conclusion was that a Hero must be a common person; so Ulan Bator lost his heroic appearance and became the actual Cosaco.

But the new Hero most of the time is confused with a Villain due to his concept of Justice, since he will do what it's necessary to achieve it (even if this implies killing his enemy) it's considered a Anti-hero by many.

However, Cosaco doesn't consider itself as a Hero or a Villain, in its own words he is 'just a man who does what he must'.

Due to his vast experience in weapons Cosaco has become a master Swordsmith.

мировоззрение (Or Mirovozzrenie); the sword that Cosaco's carries in his back has evolved through the centuries from a simple piece of steel taken from the heart of a volcano to a deadly weapon embedded with blood and tempered in the heat of War that cuts through anything. Sometimes the heaviest weight to bear, this double-edged blade has been a loyal companion through centuries. It can be said that the Sword was the pencil that wrote most of our ancient History.