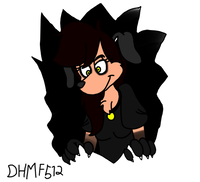 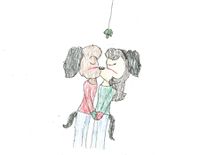 Helen and her boyfriend Alex, Drawn by Parappa390

Mighty the Super Mouse, formerly known as Helen the Pup (born February 17, 1994), is a furry artist and fursuiter who lives in the United States.[1]

Mighty creates cartoon artwork and stories involving Disney, Warner Brothers, and numerous characters from various studios. Several of her pictures involve erotica, surrealism, and references to other movies and cartoons, and cross-overs. He is also known for being a huge fan of Mickey Mouse, Danger Mouse and Mighty Mouse.

Helen was originally a female earthworm in a robotic suit, which was heavily inspired by Earthworm Jim. She soon changed her character completely in June, 2011. Helen's former fursona was a dog, originally created for the Earthworm Jim universe. But as time went, she later on developed into an Other-World, also known as Creepypasta, character, Helen's attire includes a black T-Shirt, blue jeans, and red and white sneakers. Helen is often depicted as a sarcastic, but sometimes caring character who enjoys heavy metal, creepypasta, scary movies, energy drinks, and collecting toys, mainly in the Mickey Mouse and My Little Pony: Friendship is Magic fandom. She is a yiffy character, but she has a love interest named Alex. In 2013, Helen revealed that she is now a transgender, and started referring to herself as either Mighty Mouse or Henry, and started using the Mighty Mouse character as her fursona, offering a genderswapped version of Mighty Mouse as an alternative.

In Helen's later looks, she gained an alter-ego called Smile Helen, a play on Smiledog.jpeg. Smile Helen looks identical to her normal self, expect she has red fur, yellow eyes, black paws with sharp nails, and dark red hair. She gains several abilities such as being able to see in the dark, being able to run on all-fours, and using her sharp teeth and nails as her attacks. According to Helen herself, Helen gained this side after being cursed by Zalgo after she was dragged to the Other World.

Sometime in August 2012, Mighty made an alternative fursona named Nancy. Nancy is a foxcoon, a hybrid between a fox and a raccoon. She is the daughter of Sly Cooper and Carmelita Fox from the Sly Cooper franchise. Nancy hasn't made any appearances for a while, but Mighty confirms that she is not gone. However, he said that she is no longer a fursona of his.

As of now, Mighty Mouse and Michelle Mouse are Mighty's current fursona. He mainly uses Mighty Mouse because he feels like he can connect to him the closest as a character.

Depression and Return to DeviantArt[edit]

During the summer of 2012, Mighty suffered a lot depression. Mighty believed most of his depression was caused from deviantART, the reason being that he had several issues with the site. Before abandoning his account, he wrote a journal entry on SoFurry explaining the reason of him leaving. He explained that he had issues with some of the people on the site, and that he didn't like how the site was. He also said that it was one of the main causes of his depression.[2] On July 7, 2012, he deleted her deviantART account and left the site all together. However, he return a month later to give the site another chance and stayed until February.

Roughly a week before her birthday, he left the site again. Mighty himself claims that he feels like he was just "there," and that he was simply bored with the site. He started to dislike and not trust several of his former friends, and went as far to call a user, who kicked him out of a friend circle, a 'nazi bitch cat' for being rude to him. Mighty hid on Fur Affinity for a month, but ultimately returned after his friend asked him to come back. He returned, but blocked several of the users he didn't trust anymore and made a set of rules to go by. Around May 2013, he left again, not giving a reason of deleting his page.