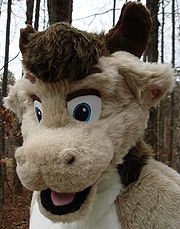 MightyTauren (born June 27th, 1964) is a fursuiter who lives in Wisconsin, United States. From 2007 to 2019 he organized an annual local furmeet, FURconsin.

MightyTauren became part of the furry fandom in June, 2006, after deciding he needed something new in his life. His toony character is based on a Tauren character from the Garona server of the World of Warcraft.

With fond memories of the time he used to wear a mascot costume at Chuck E. Cheese, MightyTauren commissioned a fursuit of his character from Lacy. This was completed just in time to be debuted at Further Confusion 2007.