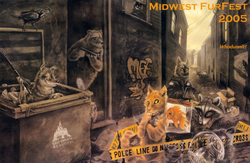 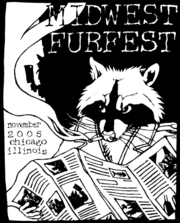 Midwest FurFest 2005 was a convention that was held at the Hyatt Regency Woodfield in Schaumburg, Illinois from November 18th to November 20th, 2005. Total attendance was 1,066.[1]

Midwest FurFest's Guests of Honor for 2005 were:

The highlight of the Charity Auction was the auctioning off of an evening with 2 and Uncle Kage entertaining the winner and their friends in a private performance; in the end, two groups who were bidding against each other pooled their funds and the performance went for $650. This was Takaza's last year heading the convention, as he passed the chairmanship over to Linnaeus for 2006. It was also announced that Midwest FurFest would be returning to the Hyatt Regency Woodfield in 2006.