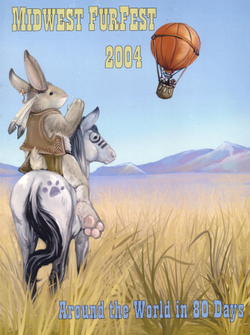 Midwest FurFest 2004 was a convention that was held at the Hyatt Regency Woodfield in Schaumburg, Illinois from November 19th to November 21st, 2004. Total attendance was 959.[1]

Midwest Furfest 2004's theme was, "Around the world in 80 days." This marked the first year in which the convention had a theme.

This year featured a unique, "one-time-only" joint show featuring Uncle Kage and 2 the Ranting Gryphon together on stage for almost two hours.

This was the first year that MFF reached outside furry fandom for a Guest of Honor and Mr. Gilbert wrote afterwards that he had a fantastic time.