Mick ono, also know as Mick39, formerly as trancy Mick, is a furry artist from the Hyōgo Prefecture in Japan.

She is primarily known as one of the creators of Sergals, but there are also numerous other fictional species such as Nevreans, Agudners, and Talyxians, in the same world Sergals lives in. They live in her stories set in the world of Vilous, a science-fantasy world created by Mick Ono and Kiki-UMA.

Sergal is most propagated creation of Mick since 2003, a fictional species with reptilian and mammalian features and human sapience. 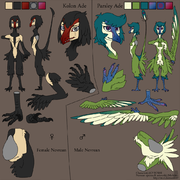 Nevrean (ネウリア "Néuria"), is a race of feathered dinosaur-like people from the world of Vilous universe, and are belonging to the group of "Eltus race (Sergal, Nevrean, and Agudner)". They are living in planet Tal, a fictional planet existing in the Vilous universe. They are often treated as birds, but to be exact, they are closer to feathered dinosaurs such as raptors than birds.

They are known as having high technology, nimble fingers, comparatively slim and lightweight body, and more sentient race than other races. But there is also the nature of racial music lovers as superior musician males and avid audience females. Furthermore, their biggest features are strong sexual dimorphism. Often their gender role is explained "opposite to humans" as a brief introduction, however, this explanation is incorrect and not perfect interpretation, though there is a conspicuous feature that females are entirely stronger than males. However, their symmetrical natures are not just "opposite to humans". For example, male nevreans cultivate their own beauty, but basic features of males in personality and behavior are still different from "feminine" styles like what human females generally do. Because they have very symbolic and abstract concepts, peculiarly their gender concept was based on Yin-Yang; females as Yin and males as Yang.

Nevreans are predominantly biologically similar to avian. While Nevreans are technically omnivorous creatures that same Sergals, the average individual's basic diet will typically consist of meat, nuts, berries, and pulses(such as soybeans). They possess recurring differences between both genders as shown below, but they obviously also have individual particularities that are proper to each specimen of the race. Everything will be written under in the form of a list so that no confusions happen.

Female Nevreans are close to dinosaurs such as Deinonychus considerably, have dull colors or natural colors feathers, tough and muscular body than males, big and stout horns on above their eyes, Sharp and visible fangs that protrude even mouth closed, sickle-shaped talon on legs such as raptors, the plumage on an arm which is little so as not to be able to glide or fly. There is the decorative feather on their tail tip, but it is not like males, theirs don't own a particularly nice or eye-catching pattern. Their voice is lower than males, and they are awkward at singing and other voice jobs to their structure of the throat. There is the fact still remains to be known; female Nevrean's jaws are stronger than Sergal's.

Male Nevreans are close to birds considerably, have vivid colors or exotic colors feathers, delicate and thinner body than females, small and discrete horns on above their eyes, small and very discrete fangs that can't be seen mouth closed, slender bird-like legs with small talons, the plumage on an arm which is long so enough to glide in the air or fly. There is the characteristic and beautiful decorative feather on their tail tip similar to that of a peacock's plumage. Their sound is just like a bird's high-pitched and beautiful cry. The first design had males with three fingers, meanwhile now, males have four fingers. As an important fact in current canon, they don't have an external penis though there are many male pornographies in fan arts. They have cloacal and genitalia structure like Earth's birds, and their original mating is similar to lesbian interaction. Consequently, 'unmingled' Nevreans do sexual intercourse for reproductive purposes only, and have a very strict and clean culture. But Urban people are not, a part of urban males can have an external penis by surgery or special training. Therefore there is no problem with drawing male porn fan creation if it is urban male.