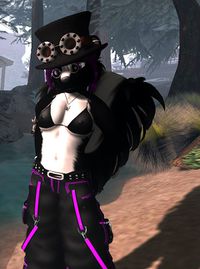 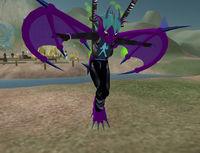 Michi Lumin is one of four founders of Luskwood and Luskwood Creatures, along with Arito Cotton, Liam Roark and Eltee Statosky.

In Luskwood Creatures, Michi takes care of community and land management, customer support and governance.[1] She's also involved in creating the avatars, having worked on avatar HUDs and skin shading. She's the founder that's seen most often, and spends a great amount of time on the Luskwood platform.[2]

In Second Life, Michi is one of the oldest active residents, having joined in October 14, 2003. She has a lifetime account.[3] Michi is often involved in community initiatives and activism. She is active on the Second Life Jira (bug tracker) and has filed and commented on many bugs regarding performance, graphics and the user interface.[4] She also participates in beta testing and conferences about issues that affect Second Life residents.[5] She's also a manager in the Trotsdale sim.[6]

Michi has a background in digital signals and encoding, knows multiple programming languages, is a certified radar and ham radio operator, plays the guitar, pilots Cessna 172-SP/G, 182-SP/G, Diamond Katana series and Remos GX airplanes, and has a large collection of lasers.

Her interests include audio engineering, cryptography, and number stations.

She worked for Sonic Foundry, ABC News, Sony, Sprint, Qwest and an advertising agency. Currently she works in signals intelligence.[7]