Paiseley is a snow-white and atomic-green Eastern dragon/canid mix. The fursona of furry artist Michelle Koralewski, she was created in early December, 2006. Michelle resides in Round Lake, Illinois, U.S.A.

Paisley used to have a doppleganger named Luap, who was an intangible extension of the character's physical being, more like a ghost-conscience rather than an evil twin. However, the character no longer exists because no art/development was ever made in that area.

Paiseley has been outed from the fandom as a whole for scamming upwards of $1000 from various users and made no attempts to reconcile with her past customers. Instead she would make a new account on Fur Affinity as soon as she was discovered, continuing to take commissions and never completing them. After over a year of repetitive behavior finally caused her to finally be banned from Furaffinity: "This user was banned because they scammed multiple users, made no attempts to reconcile with them, and created new accounts, presumably to continue the cycle. -FurAffinity Staff"

Michelle started out as a furry some time in 2003 or 2002 with a character named Sethriel, or Seth.

Seth was originally the name of an angelic character created by one of her close real-life friends, but it was adopted by the artist as the name of her furry, with permission (that was eventually granted) from her friend. From that, Seth was spawned, and 'Seth' started uploading on VCL. For a period of time, Seth was also uploading at deviantArt, but due to some silly drama, she left deviantArt to pursue greater things.

During Seth's time uploading at VCL, she and her friend Paro started a very short-lived Webcomic about two gay furry boys, a red fox named Kutya and his boyfriend, a North-American grey wolf named James. These characters are still being drawn here and there, but sparsely.

Seth was also uploading at Fur Affinity for a while, but got bored of it and dropped her gallery. (She has recently opened a new one under the name of 'Paiseley'.) 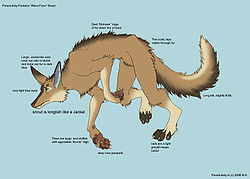 Sethriel was a fox/wolf/jackal crossbreed. Her coloring pattern consisted of a mostly taupe/tan body with light blonde 'toe-socks'. Her individual digits were a dark brown. Her muzzle blaze, eyespots, and back fur-ridge was also dark brown, and the light blonde coloring covered her entire bottom jaw. Her inner ear fur was a darker and lighter blue.

Sethriel as a character was originally a wolf, then moved to a more fennec-like appearance, and then both wolf and fennec attributes were combined with Jackal-like attributes to concoct the body, head and ear-shape. Seth had the ability to be were, feral, or anthro, but was mostly depicted as an anthro.

This character had a life-span of about three years, from 2002-2005, and then was not drawn for a period of time, but was then resurrected as 'Persnickety', to express the feeling the artist had at that time toward online communities and online culture.

Paiseley's smushed character sheet
After another long dry spell of not drawing Seth or Snick, the artist decided it was time to get back into the furry scene, but needed a character to jump in with, and not one that would be easily tossed away later.

Enter Paiseley. Originally, the name was supposed to be spelt 'Paisley', like the fabric pattern, but that name on LiveJournal was not available. So the artist had to settle for two 'e's in the name.

Paiseley's personality can be described as whimsical and slightly enigmatic with touches of avant-garde and cynicism. A typical existentialist attitude, in short.

Her physical appearance has to do with the fact that these days, so many furries seem to be obsessed with rainbow-coloring, piercing, and tattooing their characters. She has no problem with that, but prefers to have a character that will act as more of a 'blank canvas' of sorts.

Luap was essentially the exact same person as Paise, but she was completely intangible, meaning that she is seen, but cannot be touched. She acted as Paise's conscience, like the little angel on her shoulder. Most of the time, Luap was quiet and soft-spoken, there to comfort Paise when she was stressed, angry, or upset.

Her appearance was exactly like Paise's, physically, but her coloring is different and she had one extra attribute. Her entire body is a coal-grey, almost blackish color, and her mohawk is a dark lavender-cerulean blue, as is her eyes.

She also had a pair of inverted wings on her back that really serve no purpose but decoration and symbolism, and they are the same colour as her headfur, and were are her pawpads and nose. Her inner ear is a peachish color, and her mouth is typical, pink.

However, the artist decided that since there'd never been any art drawn of Luap and she didn't feel a connection at all with the character, it was basically superfluous and died out. Paiseley is a free-standing character now, not so much a representation of the artist herself, but just as a fun character to draw.